Preliminary hearings for the Inquiry’s first three investigations will take place in February and March.

The Inquiry will hold its first preliminary hearing for its third investigation, Module 3, looking at the impact of the pandemic on healthcare, on Tuesday 28 February. This hearing will take place in person in central London, and further details will be announced in due course. It will also be available to watch on the Inquiry’s YouTube channel.

The Inquiry will hold five further preliminary hearings for its first two investigations: Module 1 into the UK’s pandemic preparedness and resilience; and Modules 2, 2A, 2B and 2C, examining core political and administrative decision making in the UK, Scotland, Wales and Northern Ireland.

Procedural matters looking at how each investigation will run will be discussed at these hearings. There will be submissions from the Counsel to the Inquiry and Core Participants to help the Inquiry prepare for the public hearings, where evidence is heard. The Inquiry will publish an agenda nearer the time.

The Inquiry held its first set of preliminary hearings for Module 1 and Modules 2, 2B and 2C in October and November 2022.

The Inquiry will begin hearing evidence for its first investigation (Module 1) into the UK’s pandemic preparedness and resilience in May.

We will publish a transcript of each hearing on the same day it concludes. A recording of the hearing will be published on the Inquiry’s website at a later date. Alternative formats, including a Welsh language translation are available on request. 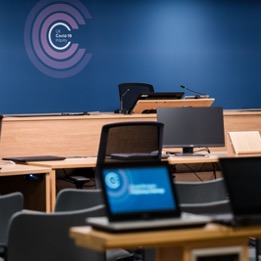